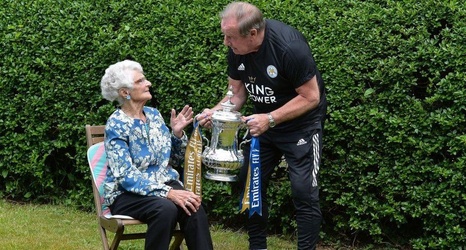 A woman who finally received an engagement ring due to Leicester City's FA Cup win after 73 years has been presented with the trophy itself.

In 1948, Margaret Angell, now 96, was promised by future husband Cecil a ring if the Foxes lifted the FA Cup.

Cecil died in 2005, so his son Mike fulfilled the pledge after the club's 1-0 win over Chelsea at Wembley in May.

Now club legend Alan Birchenall has marked the event with a surprise visit to Mrs Angell.