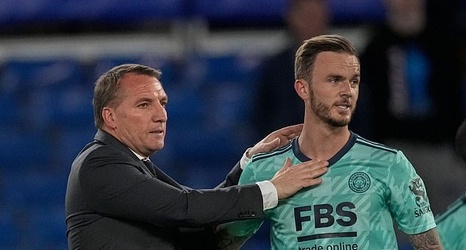 Brendan Rodgers has paid tribute to James Maddison for dragging himself up from a 'vulnerable place', with the Leicester boss claiming the midfielder deserves to be part of England's plans once more.

Maddison netted a fine strike in Leicester's 1-1 draw with Chelsea on Thursday night. It means, after having been in and out of the starting XI earlier this season, the 25-year-old has five goals and four assists in his last 11 Premier League appearances.

Mason Mount (21), Jarrod Bowen (22) and Harry Kane (24) are the only English players to have scored or assisted more than Maddison (18) this season and yet his 34-minute cameo against Montenegro in 2019 remains his sole England outing.