Leicester 2-2 Burnley: Jamie Vardy scores a double after glancing a header into his own net as hosts twice come from behind to deny Clarets their first Premier League win of the season 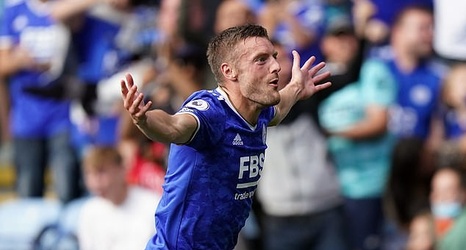 James Vardy rescued Leicester from a third consecutive league defeat with a classy double that earned them a point against Burnley that their chaotic display barely deserved.

Vardy’s early own-goal had put the visitors in front and after Leicester’s talisman had equalised, Burnley quickly regained the lead thanks to Maxwel Cornet’s brilliant strike on his full league debut.

But with the home fans growing increasingly irritable – booing loudly when boss Brendan Rodgers brought off Ademola Lookman – Vardy bailed them out with his second goal five minutes from full-time.