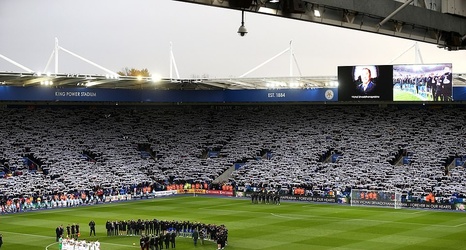 It looked like the first snow of winter — as if the seats in the King Power Stadium had been covered in a soft, white blanket cast from the heavens.

The 30,000 scarves handed out to Leicester fans were being held aloft as part of an immaculate, two-minute silence before kick-off.

But amid the quietness, the message was deafening. 'Mr Chairman' said the black stitching on one side of the fabric. 'Forever in our hearts' read the other.

The emotional scenes showed the strength of bond created between the ownership, players and supporters at the King Power