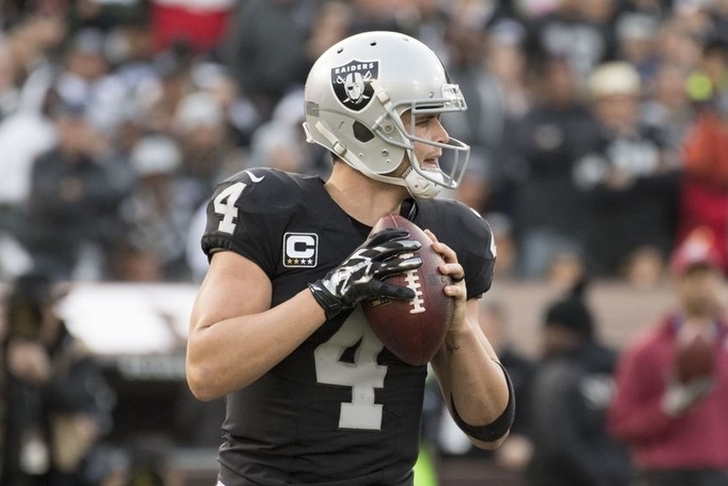 The Oakland Raiders didn't get off to a hot start against the Buffalo Bills, but they rallied for an impressive 38-24 win. The Raiders were down 24-9 at one point, before reeling off 29 straight points to improve to 10-2. They are now the No. 1 overall seed in the AFC, although the Kansas City Chiefs could totally knock them out of a bye if the Raiders don't keep winning.

Here are three things we learned from the Raiders' win Sunday.

3. Khalil Mack Is Almost Too Good
Mack didn't get off to a hot start this year. He played well, but it wasn't showing up in the form of sacks and disruptive plays. That's no longer the case. Mack had another sack against the Bills, which doubled as a strip sack that he recovered to ice the win. He also added a critical tipped pass on a rush that resulted in a Raiders INT. Mack has been a monster since the start of October, with 10 sacks in nine games. He's one of the best pass rushers in the NFL and a huge asset for the Raiders.

2. The Ground Game Needs Work
The Raiders got the win, but there's room for improvement. Namely, the run defense. It's been an issue all season and the Raiders gave 212 yards and 3 TDs on just 30 carries. That's over 7 yards per touch and the Raiders are lucky the Bills got away from the run. Maybe the return of Mario Edwards provides a boost, but the Raiders' run defense must improve to win a Super Bowl.

1. Oakland (And Derek Carr) Is Clutch
This isn't the first time Oakland has rallied from a deficit to gut out a win. The Raiders came back to beat the Saints, Ravens, Bucs (they were tied), Texans, Panthers and now the Bills. Sure, Oakland has a tendency to let teams hang around (giving their fans heart issues), but they have shown they can gut out wins. The Patriots might be the best team in the AFC still, but the Raiders are a bonafide threat.