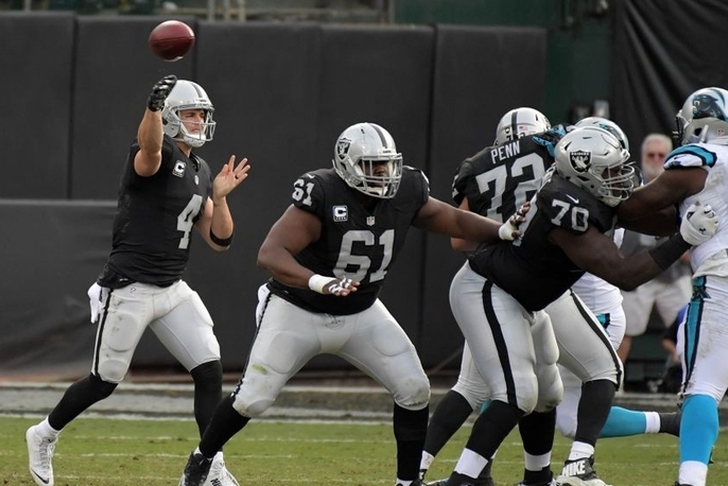 The Oakland Raiders pulled off yet another 4th-quarter comeback to win their fifth straight game with a 35-32 victory over the Carolina Panthers. Even though the game followed a similar format of many other of Oakland's wins this season, there are still several big takeaways from this game. Here are three things we learned:

3) In Derek We Trust
Another comeback victory for Carr, his NFL-high 13th since he entered the league as a rookie in 2014. Furthermore, since the Raiders were trailing by eight points in the fourth, he had to lead two scoring drives - and did that without batting an eye. He has shown time and time again that he is one of the most clutch players in the league, and that is the biggest reason why he has become one of the MVP favorites.

2) Need to stop giving up big plays
Oakland's defense has big names up front in Khalil Mack and Bruce Irvin, yet the back-end of the defense has been a weakness of theirs. They rank 24th in the league in passing defense, mostly due to the amount of big plays they've given up in the secondary. This game was no different, as Cam Newton threw touchdown passes off 88 yards and 44 yards during Carolina's comeback. It's a MAJOR area of concern that this group will have to sure up if they want to make a run in the postseason.

1) This team will overcome any and all adversity thrown at them
With Carr as their leader, Oakland has overcome virtually every obstacle they've faced. They could have folded when Carr suffered a pinky injury (which they nearly did), and they could have folded when they had given up 25 straight points to the Panthers. Instead, the offense came up with big plays when they needed it, and the defense finally stepped up and got a stop late in the game - which set up Oakland's game-winning field goal. Carr gets a lot of the credit, but this whole team is at their best when their best is needed. They showed that again on Sunday.