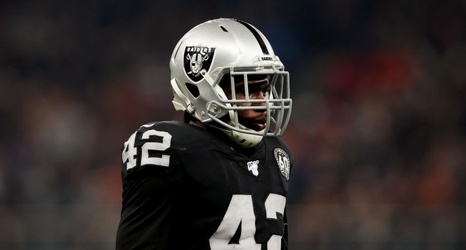 LONDON, ENGLAND - OCTOBER 06: Karl Joseph #42 of the Oakland Raiders looks on during the NFL match between the Chicago Bears and Oakland Raiders at Tottenham Hotspur Stadium on October 06, 2019 in London, England. (Photo by Jack Thomas/Getty Images)

Although the Raiders brought back Karl Joseph to pair him with former first-round pick Johnathan Abram, the team still needs to make safety a top priority.

The Las Vegas Raiders have a lot of weak spots on their team, whether it be getting after the quarterback, cornerbacks, or a coverage linebacker. With that being said, one hole that has not been addressed nearly enough this off-season is safety.