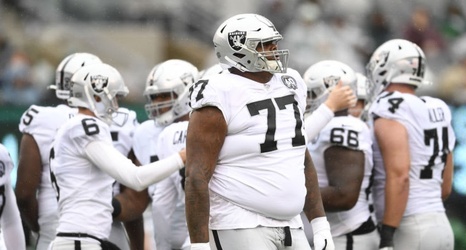 EAST RUTHERFORD, NEW JERSEY - NOVEMBER 24: Offensive tackle Trent Brown #77 of the Oakland Raiders looks on during the first half of the game against the New York Jets at MetLife Stadium on November 24, 2019 in East Rutherford, New Jersey. (Photo by Sarah Stier/Getty Images)

We will know more today whether or not the Raiders will have their starting offensive line for Sunday. Here is what it would look like if they do not.

On Wednesday, as the Las Vegas Raiders prepared to take on the Tampa Bay Buccaneers in a primetime game in Week 7, bad news started spreading around the building.