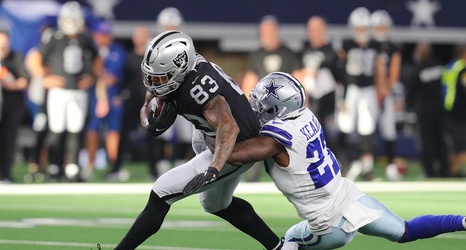 Part of the reason why there has been so much excitement about the Las Vegas Raiders acquiring Davante Adams is that he and Darren Waller can form one of the most dangerous wide receiver and tight end combinations in the entire NFL.

Adams is arguably the league’s top wideout while Waller is also considered one of the best players at his position. Put them together on the same offense and defenses are essentially put in a “pick your poison” situation.

Both guys are hard to stop on their own, let alone together, and Pro Football Focus’ Kambui Bomani has some high expectations for them by including the Raiders’ pass-catchers as a Top 5 offensive duo.