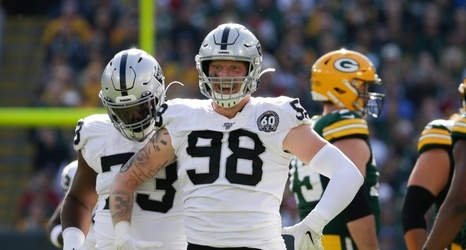 Raiders rookie Maxx Crosby was named the AFC’s Defensive Player of the Week for his surpassing performance in Oakland’s 17-10 victory over the Cincinnati Bengals on Sunday.

Crosby, a 6-foot-5, 255 pound edge rusher was selected in the fourth round (106th overall) in last spring’s NFL draft. He was a wrecking ball against the Bengals, becoming the fourth rookie in NFL history to have four sacks in one game, and forcing a fumble. Three of his sacks came in the fourth quarter.

The award was a long time coming to the Raiders.