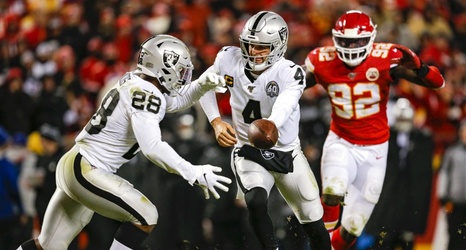 OAKLAND — The Raiders will face the Tennessee Titans Sunday without their leading rusher, according to the NFL Network’s Ian Rapoport.

Jacobs, who has been playing since Week 7 with a shoulder injury, will undergo an MRI this week to determine his availability going forward.
‘
With 1,061 yards rushing, Jacobs is fourth in the NFL and represents more than 72 percent of the Raiders rushing yardage this season.

Source: #Raiders RB Josh Jacobs (shoulder) is not able to play today. He’s slated to be inactive. A big challenge for Oakland. He has an MRI scheduled for this week.