Recapping AFC West action in Week 7 of the 2020 season 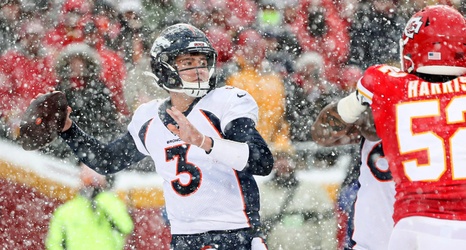 LAS VEGAS, NEVADA - OCTOBER 25: Derek Carr #4 of the Las Vegas Raiders drops back to pass in the first quarter against the Tampa Bay Buccaneers at Allegiant Stadium on October 25, 2020 in Las Vegas, Nevada. (Photo by Jamie Squire/Getty Images)

The AFC West got a little more interesting on Sunday, with the Los Angeles Chargers winning, and the Raiders and Broncos losing.

The Kansas City Chiefs dominate in a interdivisional battle against the Broncos, the Raiders lose big to an old foe in a new home, and a rookie quarterback gets the first win of his career in a interesting week 7.