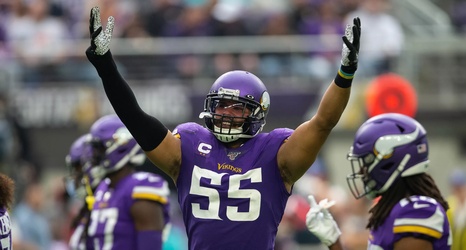 There was big news in the inactives for this game. Vikings Pro Bowl linebacker Anthony Barr will not play. He was dealing with a groin injury that caused him to miss one of the team’s practices this week but head coach Mike Zimmer seemed confident he would play. I asked Chris Gates from SB Nation Vikings site Daily Norseman about what this loss would mean to the Vikings’ defense.

“If he doesn’t [play], t’s a pretty significant loss for the defense,” said Gates. “Barr just does so many different things, whether it’s blitzing or dropping back into coverage (which is something he’s gotten exponentially better at over the years) or running down screen passes, his athletic ability allows Mike Zimmer and George Edwards to do some things that they might not be able to do if Barr wasn’t out there.