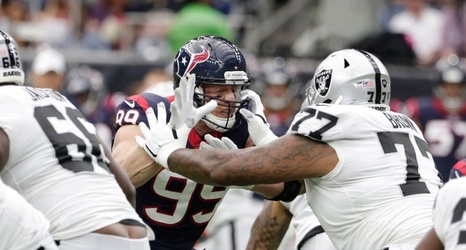 ALAMEDA — Trent Brown was placed on injured reserve Wednesday a day after making his first Pro Bowl. His season is over.

Josh Jacobs remains on the 53-man roster, but won’t face the Los Angeles Chargers Sunday because of a shoulder injury he’s played with since Oct. 20. Coach Jon Gruden is holding out hope Jacobs will be able to play against Denver in the regular-season finale on Dec. 29.

Meanwhile, left guard Richie Incognito exited the locker room in a walking boot on his right ankle, injured on the last play of a 20-16 loss to the Jacksonville Jaguars.