Raiders inactives: Rodney Hudson is out, Andre James to start at center 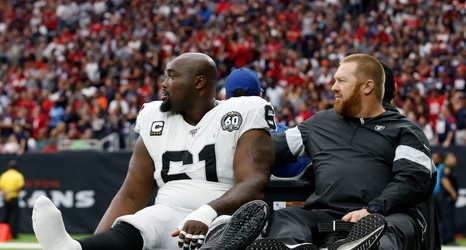 OAKLAND — The Raiders will open Sunday’s game against the Detroit Lions with Andre James at center, as starter Rodney Hudson was declared inactive.

Hudson was lost 10 plays into a 27-24 loss to Houston last week, with the initial prognosis being that he would be out at least a week. Hudson, however, improved to the point where he got on the field Friday and was listed as “questionable.”

The Raiders’ center was spotted early on the field, working on footwork with line coach Tom Cable, but apparently it was determined at that time he couldn’t play.