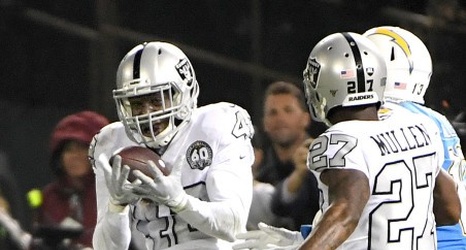 ALAMEDA — The Raiders got bad news Friday regarding safety Karl Joseph, the safety who made game-ending plays in each of their last two wins.

Joseph intercepted a fourth-down pass from Philip Rivers intended for Keenan Allen Thursday night, coming down in a heap before being mobbed by teammates. He spoke to reporters afterward, but appeared to be in discomfort and was spotted leaving the locker room on crutches.

A team source said the foot injury was substantial and it’s possible Joseph could miss the rest of the season.

A fourth-year safety, Joseph also broke up a Matt Stafford pass in the end zone intended for Logan Thomas on the final play of a 31-24 win over the Detroit Lions.