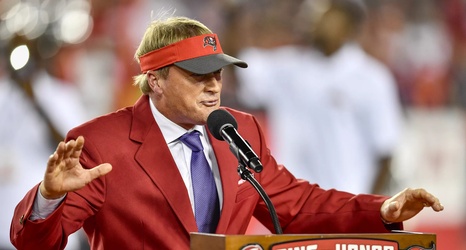 Jon Gruden’s history runs deep with the Tampa Bay Buccaneers and as his Las Vegas Raiders prepares to host his old team on Sunday night, so it is a natural topic of conversation when he spoke to reporters on Wednesday.

While Gruden — who was the Buccaneers’ coach from 2002-2008 after being traded from the Raiders — is not one for reminiscing, he did acknowledge a recent honor by the Buccaneers that helped spark his return to the Raiders.

In late December 2017, Gruden was inducted into Tampa Bay’s Ring of Honor and several of his former Buccaneers’ players feted Gruden, who led the team to a Super Bowl win over the Raiders in his first season there.