Raiders coach Jon Gruden: 'I have to do a better job of helping' Derek Carr 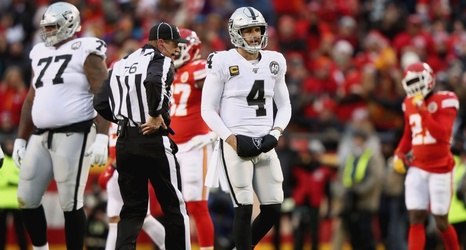 KANSAS CITY -- No, it's not Mike Glennon Time. Nor should DeShone Kizer start playing catch.

The Oakland Raiders are still Derek Carr's team despite two straight brutal games in the cold, wind and rain, the Raiders unable to do much of anything offensively and critics of the $125 million franchise quarterback readying their torches and pitchforks.

Switching signal-callers at this stage of the season, with so much still attainable, would be hard to justify. Critiquing Carr's uneven play at best, regression at worst, after 34-3 and 40-9 losses at the New York Jets and Kansas City Chiefs, respectively, is entirely warranted, though.