Raiders’ Carr, Waller do damage against Vikings but lament the one that got away 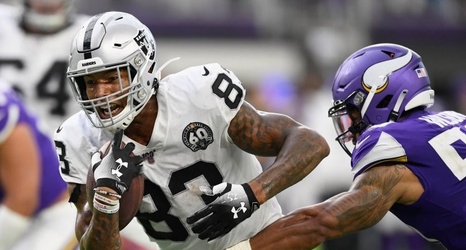 MINNEAPOLIS — Once he has some time to think about it, Raiders’ tight end Darren Waller will see the positive in a near record-setting performance against the Minnesota Vikings.

But in the immediate aftermath of a 34-14 loss at U.S. Bank Stadium, Waller was ruminating about the one ball he didn’t catch from Derek Carr rather than the 13 receptions for 134 yards that made for a gaudy stat sheet.

“That’s points right there, we could have gone into the half with momentum,” Waller said. “I look at me first, and there are plenty of things I could have done better.