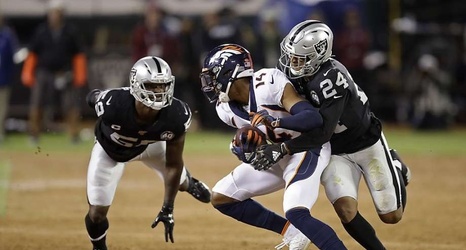 Johnathon Abram, the hard-hitting Oakland Raiders' rookie safety who was already being compared to the great Charles Woodson, may be lost for the season.

NFL Network's Tom Pelissero reported that Abram was expected to be placed on injured reserve with a shoulder injury that requires surgery. Adam Lefkoe of Bleacher Report reported Abram suffered a torn rotator cuff and labrum in Monday night's game.

IR automatically shelves a player for eight weeks, but it will likely take Abram much longer to recover from a shoulder operation. Odds are he won't return to the field until next season.