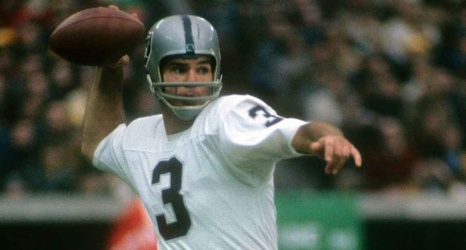 Daryle Lamonica, the deep-throwing quarterback who won an AFL Player of the Year award and led the Raiders to their first Super Bowl appearance, has died. He was 80.

The Fresno County Sherriff's said Lamonica died at his Fresno, California, home Thursday morning. The death is considered to be from natural causes.

The Raiders acquired Lamonica in a trade from Buffalo in 1967 and he was immediately the perfect fit for the vertical offense owner Al Davis coveted for his franchise.

Nicknamed the "Mad Bomber," Lamonica made an immediate impact in Oakland after starting only four games in four seasons with the Bills.