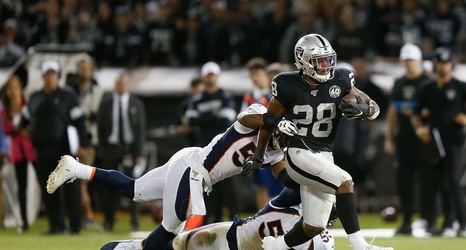 Josh Jacobs made a splash in his first game against the Denver Broncos gaining 85 yards on the ground with two touchdowns as well as one 28 yard reception on Monday Night. The team appeared to rally around him as the starting running back and his maturity showed when he asked Mike Mayock not to appear in Hard Knocks.

Patrick asked him why he wasn’t on there:

“Yeah, I asked Mike Mayock to not put me on it so……..I really didn’t want any attention. I felt like it was a lot for me to just come in and just focus on one thing and that’s playing football, learning my playbook, fundamentals and all of that stuff……the main thing [is] I asked not to be on….