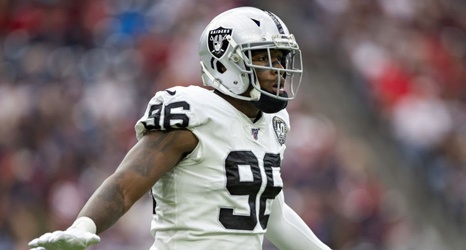 HOUSTON, TX - OCTOBER 27: Clelin Ferrell #96 of the Oakland Raiders celebrates after making a tackle during a game against the Houston Texans at NRG Stadium on October 27, 2019 in Houston, Texas. The Texans defeated the Raiders 27-24. (Photo by Wesley Hitt/Getty Images)

The Las Vegas Raiders tried to add pieces to the defensive line this offseason, and through six games, they have not been good enough.

When Jon Gruden took over the then-Oakland Raiders, one of the biggest issues was how bad they were at getting after the quarterback. Sure, Gruden kind of created the problem by trading away star edge rusher Khalil Mack, and what ensued was one of the worst seasons in NFL history in terms of quarterback sacks.