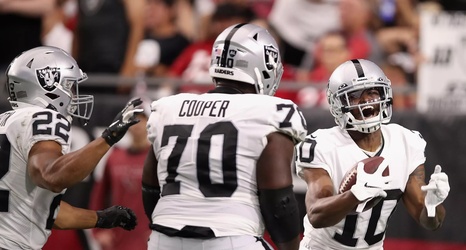 The Raiders have invested heavily into their offensive line, paying premiums for Right Tackle Trent Brown ($15.25 Million) and recently extended Center Rodney Hudson ($10 Million) while selecting Left Tackle Kolton Miller with the No. 15 overall pick in 2018.

Yet, with Gabe Jackson rehabbing from an injury to his left MCL and Richie Incognito set to serve a two-game suspension, both of the Raiders guard spots are fully in flux heading into the regular season.

Conventional wisdom suggested that former first-round pick Jonathan Cooper would seize one of those starting spots, but Denzelle Good has overtaken him in head coach Jon Gruden’s eyes, and it appears Jordan Devey has too.