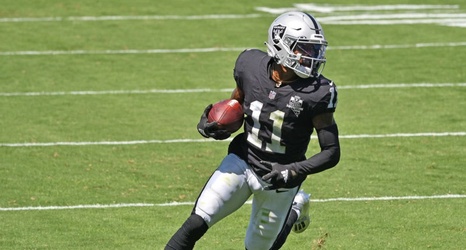 CHARLOTTE, NORTH CAROLINA - SEPTEMBER 13: Henry Ruggs III #11 of the Las Vegas Raiders runs after a catch against the Carolina Panthers during the first quarter at Bank of America Stadium on September 13, 2020 in Charlotte, North Carolina. (Photo by Grant Halverson/Getty Images)

In his NFL debut, Henry Ruggs III showed why he was the No. 1 wideout selected in April, but he also put Raiders fans on an emotional rollercoaster.

One of the more exciting debuts of the weekend for the new-look Las Vegas Raiders was wide receiver Henry Ruggs III, the team’s top draft pick from last April.