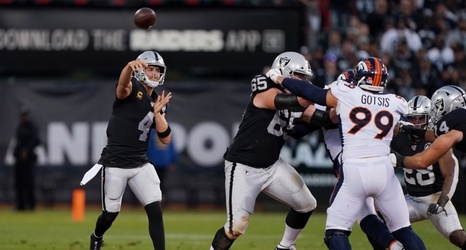 ALAMEDA — After playing their final Monday night game in Coliseum, another less glamorous farewell will take place against the Kansas City Chiefs.

Farewell, infield dirt. The old cliche, “three yards and a cloud of dust” can be retired forever.

When the Raiders host the Chiefs Sunday, it will be the last time the Coliseum has an NFL game with a dirt baseball infield. The Raiders leave town after Week 2 and aren’t back until Nov. 3 against the Detroit Lions. The World Series concludes Oct. 30, so even if the Athletics were to win at home in seven games, there would be enough time to get an all grass field ready for the remainder of the Raiders’ NFL home season.