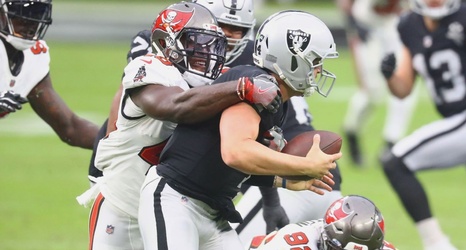 LAS VEGAS -- Derek Carr, having already taken a shot to the nether regions that no doubt raised his voice a few octaves, was absolutely blasted in the back by Devin White as the Las Vegas Raiders' quarterback attempted to scramble for a first down.

White -- who had recently tweeted that the Raiders should have taken him, rather than Clelin Ferrell, with the No. 4 pick of the 2019 draft -- was credited with his third sack of the game on the play. And White, selected one pick later by the Tampa Bay Buccaneers, was joined by several teammates as they preened and posed, hooted and hollered on the Las Vegas sideline after the hit on Carr.