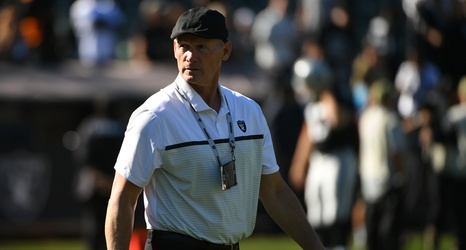 MOBILE, AL - JANUARY 26: General Manager Mike Mayock of the Oakland Raiders of the North Team on the field before the start of the 2019 Reese's Senior Bowl at Ladd-Peebles Stadium on January 26, 2019 in Mobile, Alabama. The North defeated the South 34 to 24. (Photo by Don Juan Moore/Getty Images)

The Las Vegas Raiders have the talent to make a serious playoff run this season, and here are some trades they should try to pull off to improve the team.

As the NFL trade deadline approaches, the Las Vegas Raiders could be looking to make some moves that could take their team to the next level, but what players will be available?