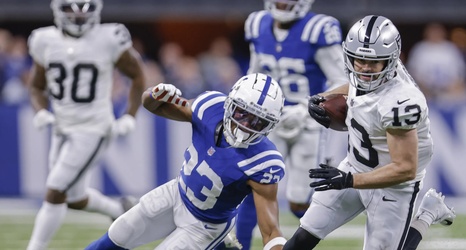 Last season was a breakout campaign for Las Vegas Raiders wide receiver Hunter Renfrow. While the Raiders’ coaching staff and fans had watched him for two years and knew he was destined for stardom, he was still an unknown commodity around the league heading into 2021.

However, after setting career-highs in receptions (103), receiving yards (1,038) and touchdowns (nine), everyone now knows who the Pro Bowler is. Adding to his list of accomplishments from last year, Renfrow’s catches are the third-highest for a single season in franchise history, and he became the first wideout since Tim Brown in 1997 to eclipse the triple-digit mark.