Raiders vs. Browns: 3 Things We Learned About Both Teams 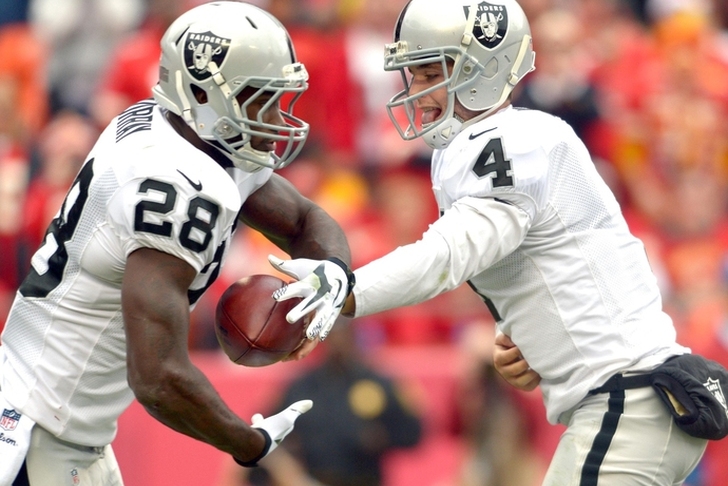 The Oakland Raiders snapped a massive road losing streak on Sunday, defeating the Cleveland Browns 27-20 for their first road win since November of 2013 and their first win in the Eastern Time Zone in 16 tries. Here's three things we learned about both teams from Sunday's contest.

1. Latavius Murray is a legit #1 back

The Raiders doubled down on their usage of Murray on Sunday, upping his touches considerably to 27. It worked, as Murray gashed the Browns for 149 all-purpose yards (139 rushing) and announced himself as both a worthy lead back and a fantasy football darling.

2. Derek Carr is the right guy for Oakland

After Oakland's blowout loss to the Cincinnati Bengals in Week 1, there were plenty of detractors out there ready to nominate replacement options for the second-year quarterback. That was a tad premature. Carr lit up the Ravens last week and followed it up on Sunday by throwing for 314 yards and two scores. He's the best sophomore quarterback going, bar none.

3. Oakland is a potential contender

We're talking about baby steps here, but the Raiders are 2-1 and have a very winnable road game in Chicago next week. They'll follow that up with two KEY in-division contest at home against the Broncos and at the Chargers. If the Raiders can win two of those three games, they'll be a true AFC playoff contender midway through October.

Despite chants for Johnny Manziel throughout the game, Josh McCown actually had a more-than-solid game on Sunday -- throwing for 341 yards with two touchdowns and one pick. He did take five sacks, but a lot of that had to do with a porous offensive line rather than any hesitation on his part.

Isaiah Crowell got just 10 carries for 36 yards, mostly because the Browns were playing from behind all day. Rookie Duke Johnson added four carries for just three yards. All together, the Browns rushed for a shade under three yards per carry, creating a one-dimensional attack that just didn't have enough oomph to put Cleveland over the top.

3. Things could go from bad to worse for the Browns

The Browns sit at 1-2 and have this death slate to contend with over the next three weeks; at the Chargers, at the Ravens, home for the Broncos. Games on the West Coast are always tough, regardless of the Chargers' stumble today. The Ravens may be 0-3 but they're dangerous. And then there is the Broncos...If Cleveland can't right the ship right now, they'll be 1-5 and head coach Mike Pettine will be fending off "hot seat" rumors.