Raiders vs. Bears: 3 Things We Learned From Both Teams 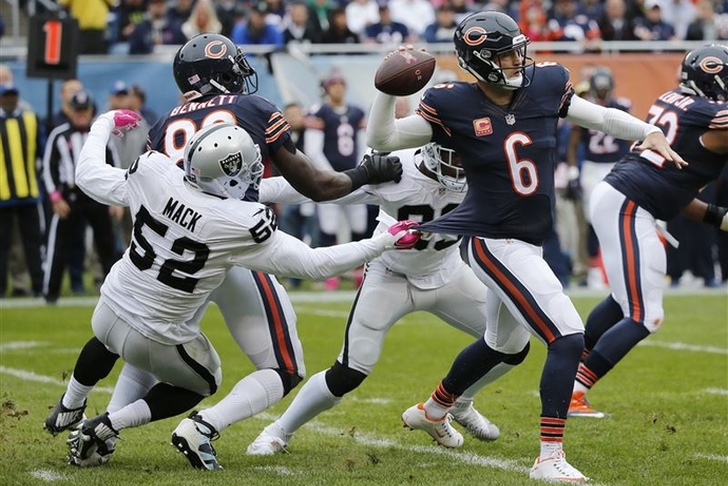 The Oakland Raiders and Chicago Bears locked up in a back-and-forth struggle on Sunday -- a tussle which ended in favor of the Bears on a long Robbie Gould field goal with two seconds left, 22-20. Here's three things we learned from both teams during this game.

Latavius Murray is still learning. Whether it was due to an apparent shoulder injury or just plain nerves, Murray's case of the yips on Sunday was the main contributing factor (in our opinion) to the team's razor-thin margin of defeat. He's still a heck of a talent. But, he still needs time and repeated reps to become elite.

Charles Woodson is turning back the clock. The 38-year-old future Hall of Famer has interceptions in each of the team's last two games, including a game-sealer in Cleveland last week. He's got plenty in the tank -- so much so that he's the team's BEST defensive back right now.

We're not selling on the Raiders. Chicago was due after a deflating 0-3 start, especially with the lift of Jay Cutler returning at home. There's plenty of quality teams who will be 2-2 or worse in this upside-down start to the 2015 NFL season.

Jay Cutler would love to have the interception back that he threw to the aforementioned Charles Woodson. But, he still one heck of a clutch quarterback and will be the X-factor for the Bears if they're going to get back into the playoff chase.

Martellus Bennett is the most dependable tight end target in the league. Yes, his 11 catches went for just 83 yards. He still had a score to his credit and provided the Bears with managable second and third downs all day long.

John Fox is tweaking Chicago's formula each week. While he hasn't yet stumbled on a cure for this team's overall ills, he's still on the right track with this time. Give it a few more weeks and the Bears will be a force to be reckoned with.