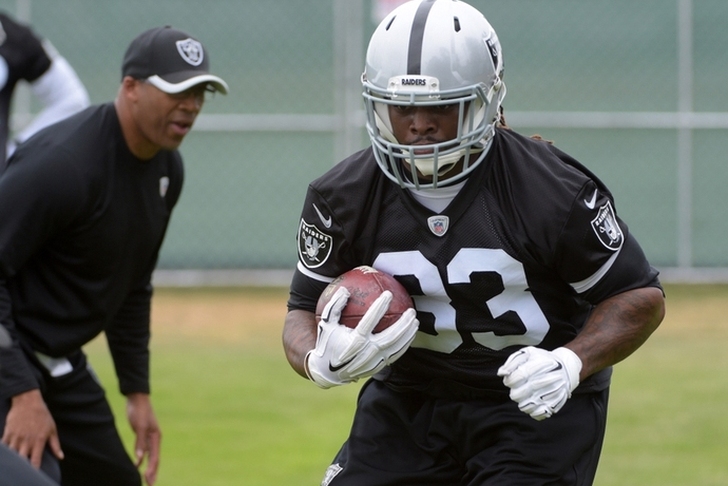 The Oakland Raiders have been on the outside looking in at the NFL Playoffs dance for 12 seasons running, but the pieces are in place for a major Raider Nation come-up in 2015. Here's what we've learned in training camp so far that we can take over to the regular season:

After battling off a particularly nasty bout of pneumonia, new Oakland Raiders running back Trent Richardson joined the team for training camp for the first time on Thursday.

“Trent is here, he came back very close to the weight, which was a pretty ambitious goal to get to and he’s down in the low 220s," Del Rio said of Richardson's commitment to slimming down this offseason. "That’s what we asked of him, that’s where he was as a player at ‘Bama.”

Richardson was fined multiple times with the Indianapolis Colts for weighing in at more than 227 pounds -- a stipulation that had been added into his contract with the team. For Richardson, Thursday wasn't necessarily about showing off his slimmer frame. It was about finally getting a chance to showcase his abilities in training camp.

“It feels good,” Richardson said, per the San Francisco Chronicle. “It’s probably been the most eager I’ve been to go to practice for a long time. It’s been a long time coming for me. I haven’t been out there practicing.”

The Oakland Raiders' running back competition doesn't look like much of a competition right now, with incumbent halfback Latavius Murray getting all of the Raiders' first-team reps in training camp over Trent Richardson and Roy Helu Jr. Oakland Raiders general manager Reggie McKenzie is a huge fan of Murray's, telling reporters recently that Murray "can do it all" in a seeming vote of confidence. The 25-year-old Central Florida burst onto the national scene with 112 yards and two touchdowns in a Thursday night win over the Kansas City Chiefs last season -- the Raiders' first win of 2014.

Derek Carr is ready to lead this team

Carr’s rookie season is on the very shortlist for all-time best campaigns for a first-year quarterback, and he's taken a noticably increased leadership role so far through camp. With a rebuilt backfield and a revitalized receiving corps that now features Amari Cooper, it’s blue skies ahead for the most talented Raiders quarterback since Rich Gannon.