Raiders Rumors: Trumaine Johnson Rumored To Oakland And Aldon Smith Has Been Released 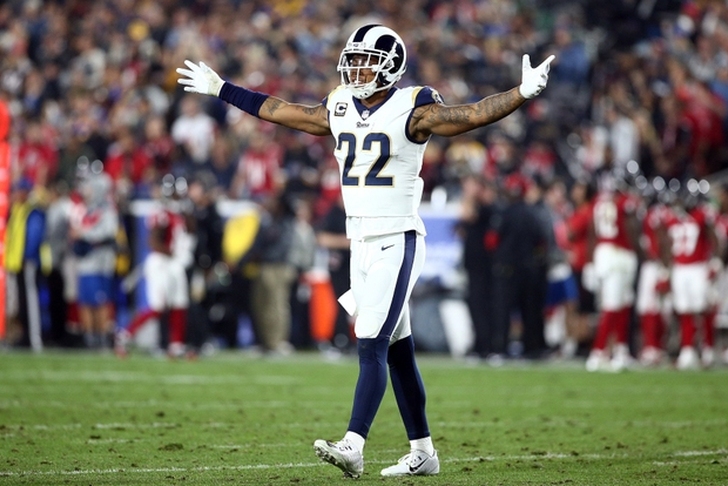 The Raiders rumors this offseason have been circling around the Oakland Raiders defense and how to improve it. Oakland finished 6-10 last season and need to add talent on defense to make it back into the playoffs. The best player available in free agency on the defensive side of the ball is cornerback Trumaine Johnson and his name is linked to Oakland.  Despite Oakland's needs on defense, see why they released former first-round draft pick linebacker Aldon Smith today. Here are the top Raiders news and rumors from today you need to know:

Trumaine Johnson headed to Oakland?
Trumaine Johnson is not expected to re-sign with the Los Angeles Rams after the Rams acquired cornerback Marcus Peters from the Kansas City Chiefs. Last week NFL Draft Analyst's Tony Pauline reported, the 49ers are expected to be the Raiders' "main competition" for Johnson. Which brings us to today.

ESPN's Rich Cimini reported on Sunday, Johnson is rumored to be heading to Oakland. The Raiders need help at the cornerback position after cutting CB David Amerson and they are expected to cut CB Sean Smith. The Raiders need to add talent in the secondary, but if they are competing against the 49ers, it may be difficult to land Johnson. The Raiders have $21.9 million in cap space according to Spotrac which is much less than the 49ers $69.8 million.

Johnson had 65 tackles, two INTs, one FF, and one TD in 2017. His market value according to Sportac is around $13.6 million per year, which means the Raiders should be able to sign him.

Raiders release Aldon Smith
Last week Aldon Smith was in the news for the right reasons, proposing to his girlfriend, Shawna McKnight. After the engagement, McKnight said they haven't picked out a wedding date because the couples main priority was getting Smith reinstated into the NFL as soon as possible.

According to the San Francisco Chronicle, the Raiders released Smith on Monday after San Francisco police confirmed they were looking for Smith who has been connected with a domestic violence incident over the weekend.

Smith is 28 years old who remains suspended from the NFL for violation of its substance abuse policy. The former first-round draft pick in the 2011 NFL Draft has not been able to stay out of trouble. He was also released by the 49ers in August of 2015 after he was arrested on suspicions of DUI, hit and run and vandalism. It was his fourth arrest and third DUI arrest in only four years.

The Raiders then signed Smith in 2015 and he played in nine games before he was suspended for violating the league's drug policy. On Saturday police were seeking Smith in the 600 block of Bush Street in Francisco for an alleged domestic violence case, but Smith fled the scene. Smith has since checked himself into rehab.