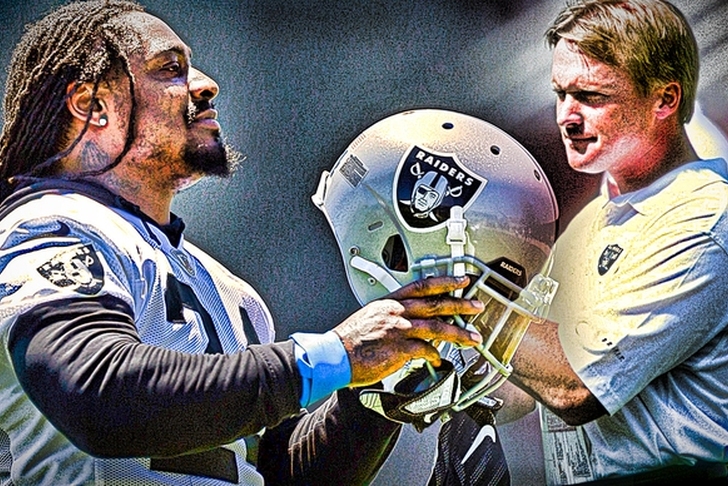 The Oakland Raiders missed the playoffs in 2017 with a 6-10 record and will look to climb back on top of the AFC West in 2018. Oakland has a new fiery head coach in Jon Gruden this season, and his passion should excite RaiderNation fans. There have been rumors surrounding Gruden and his relationship with certain players, leaving people wondering if he will be able to coexist with his new team. If Raiders players don't buy into Gruden's coaching will he look to replace them in free agency?

Here are the latest news and rumors surrounding the Raiders you need to know:

Marshawn Lynch's Agent Goes Off On Twitter
Rumors have been swirling around running back Marshawn Lynch's relationship with Gruden and yesterday Scott Winter of Las Vegas Raiders Report reported that "Lynch blows off meeting with Gruden."

Lynch's agent Doug Hendrickson didn't like the speculation from Winter and took his anger out on Twitter. "To all the couch potato non verified media ppl speaking on Marshawn Lynch-get a real job and check sources! #beastmode," Hendrickson said.

Lynch's status with the team remains in the air for 2018. If Lynch did miss the meeting, his agent doesn't seem to believe it's a very big deal.

Le'Veon Bell Headed To Oakland?
If the Raiders decide to part ways with Lynch whose status for 2018 remains to be seen, this may open the door for them to sign another running back. If the Pittsburgh Steelers are unable to complete a deal with star running back Le'Veon Bell, the Raiders may target him.

Bleacher Report's Justis Mosqueda believes that Bell also may be the prize target for the Raiders in free agency. "If you're going to pay a running back like a top-100 player in the NFL, you're paying for his name and not his ability to win you football games." Mosqueda said. "If there's any team that is looking to buy names right now, it's the Oakland Raiders."

The Raiders did just pull Gruden out of retirement and signed him to a 10-year deal worth $100 million, so Mosqueda isn't totally wrong. Bell would cost the Raiders some serious money, but they haven't shown they are afraid to spend big to win.

Tom Cable Linked To Colts Head Coaching Vacancy
New England Patriots offensive coordinator Josh McDaniels ruffled some feathers on Tuesday night when he decided to not accept the head coaching job for the Indianapolis Colts. Now the Colts are forced to re-evaluate their options. One of those options is Raiders offensive line coach Tom Cable, according to NFL.com.

Cable was 17-27 as head coach of the Raiders from 2008-10, before he was fired. He then went on to serve as an assistant coach with the Seattle Seahawks from 2011-17 before rejoining the Raiders on Jan.13th as the offensive line coach.

His chances aren't high, but the 53-year-old coach still has a chance of becoming the next Colts coach.