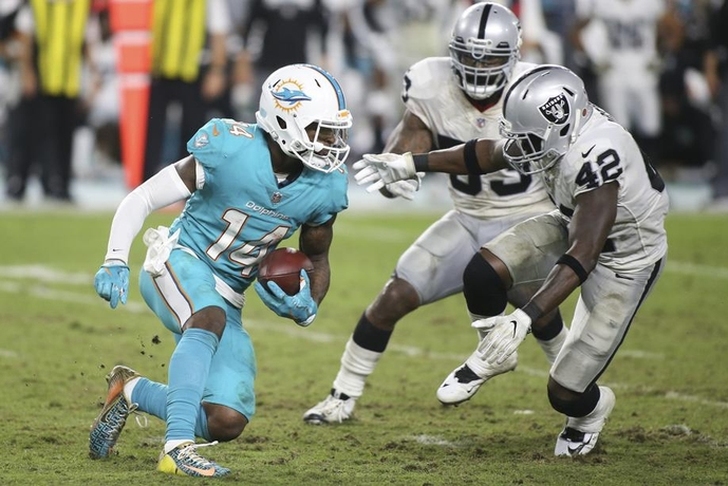 The Oakland Raiders need to show the city of Oakland and the NFL that this team means business in 2018 after a disappointing 6-10 season in 2017. What better way to show you are a serious contender than hiring Jon Gruden as head coach for 10 years and $100 million? Perhaps trading for one of the best wide receivers in the NFL would also do it. If the Raiders look to add offensive players in trades or free agency will they go defense in the 2018 NFL Draft? Here are the latest Raiders rumors you need to know:

Jarvis Landry To Oakland?
The rumors swirling around the Raiders and wide receiver Jarvis Landry joining the team continue to grow. These rumors somewhat stopped when the Miami Dolphins franchised tagged Landry on Tuesday. A few hours later, however, ESPN's Jeff Darlington reported the Dolphins may be tagging Landry in order to trade him.

Today Adam Schefter reported that the Dolphins will meet on Wednesday to discuss Landry's future with the team and multiple sources suggest that Miami is interested in trading Landry.

Last week 247 Sports writer Jeff Smith, wrote an interesting article about a trade involving Raiders wide receiver Michael Crabtree and Landry. Landry's $16 million price tag for 2018 is a lot, but it's much less than what Landry will likely bring in for a long-term deal. Crabtree is scheduled to make $7.68 million in 2018 and $8.25 million in 2019, but he can be cut at any time and it wouldn't cost the Raiders anything in dead cap space.

The idea of Landry joining quarterback Derek Carr is appealing, however, a few more dominos need to fall to make this trade happen. The Dolphins are $7.5 million in the hole according to overthecap.com. Perhaps the Dolphins would look to trade for Crabtree to get out of the negatives in terms of cap space.

DT Vita Vea To Raiders In Latest Mock
Who will the Raiders select in the first round of the NFL Draft? Many experts have pegged the Raiders selecting Georgia linebacker Roquan Smith, but Eric Galko of Sporting News believes they will go a different route with Washington Huskies DT Vita Vea.

"Oakland has ample talent on offense, but it needs to continue to upgrade its defense," writes Galko. "The Raiders’ run defense, particularly on the interior, needs substantial improvement. Vea is a Haloti Ngata-like talent."

Vea is an athletic freak who moves very well for being 340 pounds. He racked up 99 tackles and 9.5 sacks in his three seasons at Washington.

Carrie played in 98% of the Raiders snaps and stepped up big for the Raiders in 2017 with the injuries around Oakland's secondary. The Raiders hopefully re-sign Carrie who is only 27 years old and has been a great surprise for the Raiders defense.