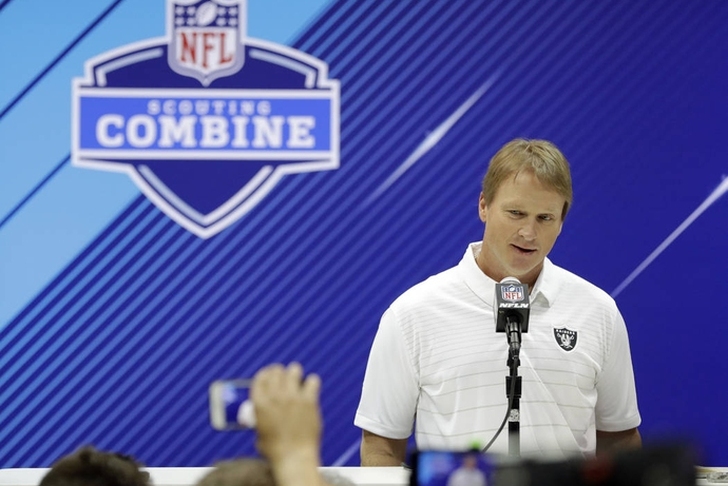 Today is the first day of the 2018 NFL Combine and head coach of the Oakland Raiders Jon Gruden talked about the upcoming season and some of his key players. If the Raiders want to get back on track after a poor 6-10 season, Gruden will need to rely on wide receiver Amari Cooper and running back Marshawn Lynch. There have been plenty of rumors surrounding Lynch and Gruden's relationship, but after Gruden spoke today the rumors may be laid to rest. Here is what Gruden had to say about Cooper and Lynch today:

Amari Cooper Will Be The "Focal Point" On Offense
Amari Cooper had a disappointing third season in the NFL, catching only 47 balls for 680 yards and seven touchdowns. This is a major decline considering he had over 70 catches and 1,000 yards in his first two seasons. The former first-round pick will need to bounce back in year four and Gruden is confident he can do that. According to NBC Bay Area, Gruden said Cooper will be the Raiders' offensive "focal point" moving forward.

"I hope he's listening here today," Gruden said. "I'm looking forward to joining up with Amari Cooper. He has tremendous quickness. He's smart, versatile and he's a gamer. He likes the bright lights, and he'll be the headliner in our offense."

Cooper will lead the Raiders wide receivers in 2018, looking to regain his connection with quarterback Derek Carr.

WATCH: Here Are The Top Oakland Raiders Draft Picks In Each Round Since 2000

Gruden Is "Counting On" Marshawn Lynch
A common topic on the Raiders Report has been the rumors surrounding Lynch's return to the Raiders, and if he does return will he have a solid relationship with Gruden? Well, both rumors may have ended. First NFL Network's Ian Rapoport reported that Lynch is in great shape and expected to return to Oakland in 2018.Then Gruden at the NFL combine today stated that he is counting on Lynch to be a major part of the Raiders team.

"He's still a beast that's hard to bring down," Gruden said. "And one of the reasons I'm excited to be with the Raiders is to join forces with Lynch. But we'll see what happens. Obviously, we have to take a look at the entire roster. But I'm counting on him. I'm counting on him being a big part of our football team."