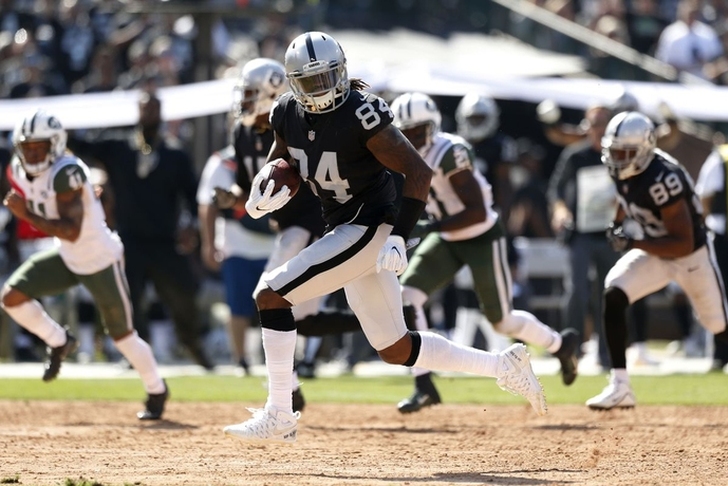 The Oakland Raiders signed Cordarrelle Patterson to be their return man, but they are also finding ways to take advantage of his skillset offensively.

Though he's listed as a wideout, Oakland had Patterson run the ball three times in their win over the New York Jets on Sunday, including this 43-yard touchdown run.

Head coach Jack Del Rio said the Raiders will continue to find ways like that in order to get the ball in Patterson's hands.

“We’ve got some things that we’re going to do with him. We’re excited,” Del Rio said. “We think he’s a real weapon, we think he’s a strong, physical, fast guy. We look to get him involved. I think it’s gone beautifully the way it’s developed. He’s had to work at it. There’s a lot of learning on his part, to understand how to be in different positions, how to line up, how to get the play call, how to know what the responsibility is. He’s involved in all phases, touching the ball a bunch of different ways, blocking a lot of different ways, running routes a lot of different ways, so a lot of responsibility on his part as well. For us to develop him, for him to embrace and grow in those areas and he’s done a great job of it. I credit him and I credit the staff working hard with him.”

For his part, Patterson doesn't care how he gets the ball - as long as he gets it.

“I want the ball in my hands. It makes no difference how I get it,” the 6-foot-2, 220-pounder said. “I always think I’m going to score. It’s no different if I catch it, return it or it gets handed to me. I believe I’m going to make something happen.”

Patterson only has two catches for eight yards this season but has 62 yards and that touchdown on four carries.