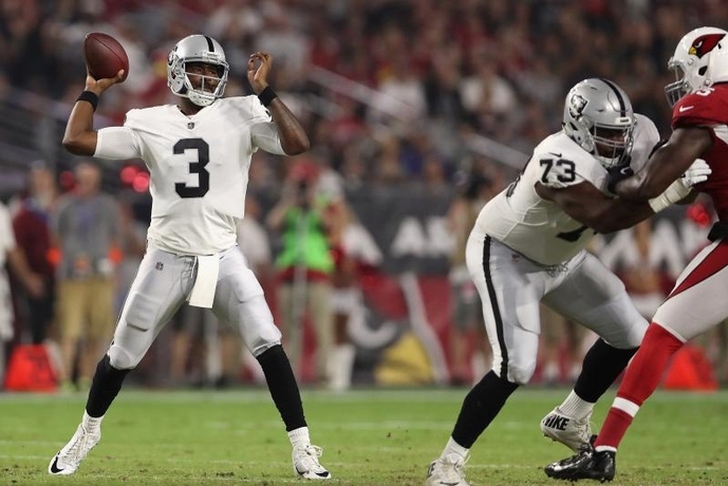 There is no question about Derek Carr's status as the Oakland Raiders' starting quarterback, but the spot as his backup was very much up for grabs doing into the season.

New signing EJ Manuel has been competing for the backup job with Connor Cook throughout training camp, and head coach Jack Del Rio said that Manuel has won the job to this point.

“I think the time we had here and the first game the other night, I think he has done a little more, done enough to be in the second slot," Del Rio said. "I think they’ll continue to alternate reps and both get opportunities to show us. I’m pleased with both of the guys. I thought both guys operated pretty darn well the other night.”

The Raiders finished up training camp in Napa on Thursday and will conduct the rest of their practices in Oakland.

With three preseason games remaining - including their upcoming matchup against the Los Angeles Rams on Saturday - the competition between Manuel and Cook is far from over. But, for now, it's Manuel's to lose.

Cook started two games for the Raiders as a rookie last season after Carr's injury, passing for 161 yards with one touchdown and three interceptions in their playoff loss to the Houston Texans.

Manuel has spent the first four years of his career with the Buffalo Bills, where he never lived up to the expectations of being the No. 16 overall pick. He appeared in six games last year, completing 11/26 passes for 131 yards. Manuel has thrown 19 touchdowns and 15 interceptions while fumbling seven times in his career.