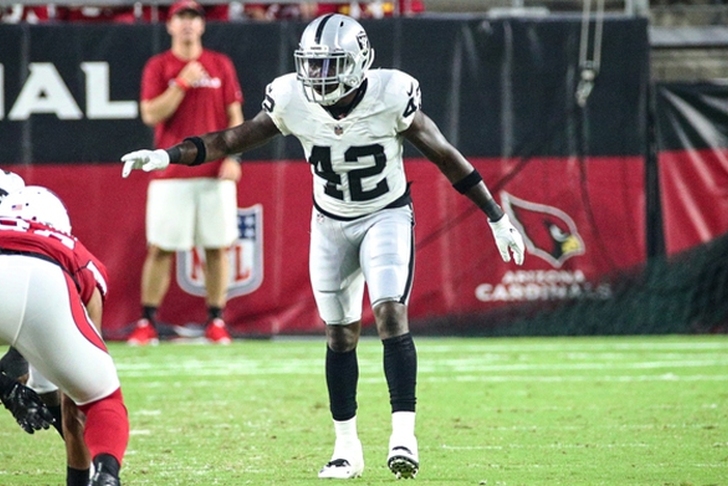 The Oakland Raiders lost 20-10 to the Arizona Cardinals in Week 1 of the NFL Preseason, but it's not the end result that matters at this point. Rather, it's far more important to see how individual players fared. The preseason games are critical for young players, rookies and those battling for starting jobs and roster spots. With that in mind, here are six risers and four fallers from the Raiders' week 1 preseason game against the Cardinals. They're in no particular order.

S Shalom Luani
Luani looked great in his first action for the Raiders. A late round pick getting the early nod because of other injuries, Luani made the most of his snaps. He nearly made a great interception and had five solo tackles. He's not going to be a starter for the Raiders this year barring injury, but he could provide solid depth and special teams play right away.

LB Cory James
Of the Raiders' young linebackers, it was James who fared the best. He racked up seven tackles (all solo), including four on the first drive against the starters. He did give up one catch, but also forced two pressures and recorded on QB hit. For a Raiders team that needs at least one LB to step up, James' play was a welcome sight. Still, the linebacking unit remains an area of concern.

LB LaTroy Lewis
In his college career, LaTroy Lewis had just 4.5 sacks. In his first NFL action, Lewis had two sacks and four tackles. This might end up being a flash-in-the-pan situation, but the UDFA really helped himself against the Cardinals. It caught even the Raiders by surprise.

Del Rio on undrafted rookie LB LaTroy Lewis' 2 sacks: "No one really saw that coming. It's one of those good stories."

Lewis still has an uphill battle to make the roster, but he's got the attention of the staff. An honorable mention to fellow LB James Cowser who didn't impact the box score as much, but was repeatedly around the ball.

S Karl Joseph
I'm about to sign the praises of Joseph, so first up is the negative. Joseph is not great in pass coverage and that was the case against Arizona. A great example was on Troy Niklas' TD catch, as Joseph let Niklas get behind him and then got lost to allow the TD.

And finds Troy Niklas for the @azcardinals TOUCHDOWN! #OAKvsAZ pic.twitter.com/jEySPKC4nY

So that's the bad. The good news is that Joseph is a monster in the run game. Look at the pursuit and plays he makes here.

Karl Joseph, coming down from the 2-high alignment with a head of steam is a thing of beauty. pic.twitter.com/raVv3f91IM

A powerful hitter, Joseph is a box safety. Let him play most of his snaps there and he'll make tons of plays against the run. With the boost of his first healthy offseason, expect a big year from Joseph.

DT Treyvon Hester
Hester, a seventh round pick from Toledo, made quite the impression in his battle for a roster spot against the Cardinals. He racked up two sacks against Arizona, another showing of signs of life from a DL that was far too quiet against the pass last year. Hester was one of several DL to fare well (Eddie Vanderdoes and Mario Edwards Jr.), but the two sacks get Hester the nod. He does need some work against the run, however.

QB EJ Manuel
In the battle for the backup QB job, Manuel outplayed Connor Cook (more on him below). Manuel was far more accurate and steady, completing 10 of 12 passes for 107 yards. The race is far from over, but Manuel has the edge. Also, shoutout to WR Jaydon Mickens, who did a little bit of everything against Arizona.

CB Sean Smith
Smith has fallen from one of my favorite free agent signings last year to a player who looks completely outmatched. Smith has tumbled down the depth chart and didn't help himself against Arizona. He was beat multiple times and drew two penalties.

Sean Smith was getting destroyed by double moves in this game. Will see less of the field when Conley returns. pic.twitter.com/E1hLZM7Eu3

Smith's contract means he likely won't be cut, but he needs to get better quickly.

QB Connor Cook
Cook did not fare well with the backups against Arizona. He completed a meager 10 of 21 passes for just 82 yards. That's a worrisome sign for a player who struggled in his lone NFL action and whom the team hoped could be their backup. He needs to bounce back soon or he won't be the backup QB.

LB Marquel Lee
Lee's inclusion here is not to say he didn't make some good plays. There were a few good coverage moments, he did record six tackles (five solo) and pounced on a fumble. But there were plenty of bad moments as well. He had pushed back too many times in run support and was beaten a few times in coverage. Remember that Niklas TD that's posted above? #55 (Lee) had a coverage lapse at the beginning, handing him off to no one and was more focused on the QB than Niklas at the end of the play.

And finds Troy Niklas for the @azcardinals TOUCHDOWN! #OAKvsAZ pic.twitter.com/jEySPKC4nY

All in all, Lee looked like a rookie. He had some moments and there's upside, but he didn't play as well as the box score might suggest.

OT Vadal Alexander
The Raiders are without Donald Penn right now, so Vadal Alexander is getting more action. He's in a battle for the RT spot anyway, but he didn't help himself against Arizona. He was beaten twice by Kareem Martin (of all people), once for a sack and another for a pressure. You'll have to excuse the potato quality of the video, but the sack was brutal.

That's the last thing the Raiders want to see: they can't afford for Carr to take a beating. If Alexander wants to start, he needs to do better. He allowed the only sack against Arizona.