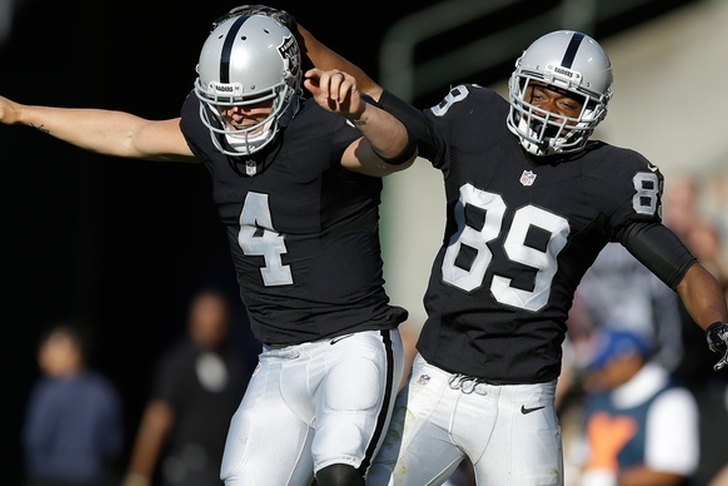 The 2017 NFL Draft is over, which means it's time to take a look at how the Oakland Raiders depth chart currently stands. The Raiders aren't done making moves, they could still sign a player or two and their are roster cuts before the season, but this is a projection of how they depth chart currently looks.

Not every player on the roster will be listed, since there's no real need to include UDFAs who won't make the team. Instead, think of this as an expanded two-deep depth chart. And, with fall camp yet to begin, much can and probably will change. With that in mind, here's the Raiders depth chart projections after the draft.

Derek Carr will be healthy for the start of the season, which is the best news the Raiders could have.

Here's Who The Raiders Signed As UDFAs

Beast Mode will be the featured back on first and second down, assuming he remembers his old self. Richard and Washington will serve as the third down and chance of pace backs. I'm a big Hood fan and the Raiders could elect to keep him as the future heir to Lynch. Worst case, he's a prime practice squad candidate. Jones barely made the roster last year and this might be the year he gets cut.

Not too much to discuss here. If the Raiders use a fullback again next year, as expected, it will be Olawale.

The top three options for the Raiders won't change this year. Coop and Crab are outside, with Roberts in the slot. But Patterson replaces Andre Holmes as the No. 4. Patterson has serious speed and he'll bring another vertical element, plus be great on returns. The fifth spot will again be a battle, with Holton the favorite because of his special teams contributions. Mickens could make a run at the slot, although he still might be a year away. Zamora is a practice squad candidate.

Game-by-Game Prediction of the Raiders' Schedule

Getting Cook in town gives Carr the weapon at TE he truly hasn't had before. Smith will likely be the No. 2 TE who focuses on blocking. The third TE spot will be a battle between Walford and Holmes, with Walford the favorite for the time being.

The left tackle, center and both guard spots are set in stone. The right tackle spot is not, with Howard set to battle Marshall Newhouse. If healthy, my money is easily on Howard. Feliciano will handle the center and guard backup duties. The Raiders drafted Sharpe in the fourth round, so he should make the roster. The hope from the staff is that he can eventually be a starter at either tackle or guard. Alexander should be one the roster as a guard/tackle hybrid, but that would put the Raiders at nine linemen. They might not carry that many. The drafting of Sharpe doesn't bode well for Kirkland's roster chances.