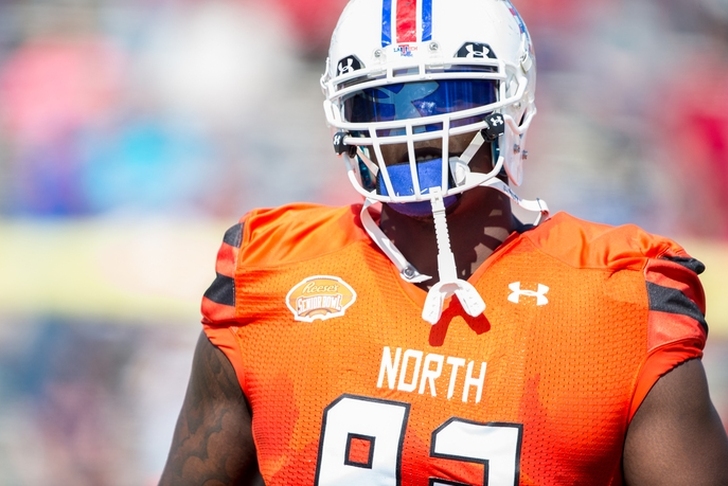 The 2016 NFL Draft is just weeks away, and the Oakland Raiders have put themselves in a position where they don't have to reach early to fill a need thanks to a strong free agency. The Raiders still have team needs, but they could elect to simply take the best player on their board in Round One. With the draft rapidly approaching, here are the latest Raiders draft rumors:

Raiders Still Looking For Secondary Help?
The Raiders signed CB Sean Smith and safety Reggie Nelson in free agency, landing two of the top available players. But that doesn't mean the Raiders are done looking for secondary help. The Raiders' website says Oakland could look to add a player or two in the secondary during the Draft. Oakland could still use some corner depth and adding another starter to pair with Nelson is an option. The Raiders could spend their second round pick on a safety, such as West Virginia's Karl Joseph.

Butler has the versatility to play several spots on the defensive line, which should help his draft stock. The Raiders have DE Mario Edwards, but his future is in question after a neck injury. Butler would give the Raiders another quality defensive lineman in either a 3-4 or 4-3 look.

Raiders Meeting With WR
The Raiders have Michael Crabtree and Amari Cooper as the starting WRs, and even brought back Andre Holmes. However, the Raiders are still looking into adding a WR during this year's draft.

Daniel Braverman doesn't get much love because he played at Western Michigan, but has the potential to be a solid slot WR in the NFL. The Raiders don't have a true slot option, and Braverman declared for the NFL Draft early. He doesn't have great size or speed, and looks like a late round draft pick.

Follow our Oakland Raiders team page for all the latest Raiders draft rumors!