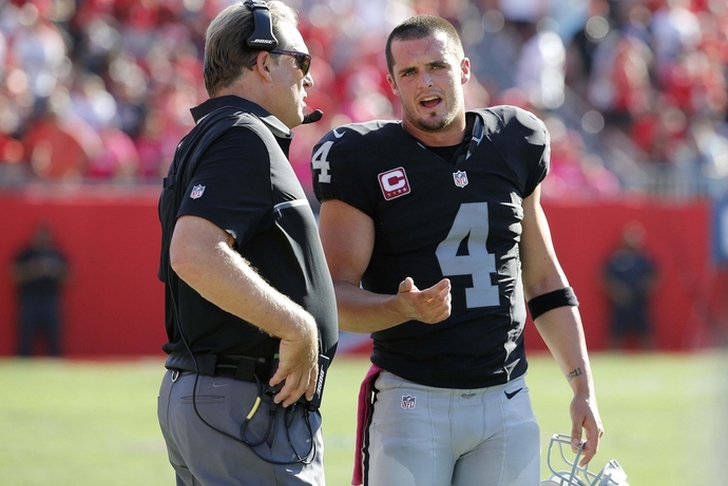 The Oakland Raiders have been one of the least active teams in the free agency market during the first few days of the new league year, but quarterback Derek Carr says that's a good thing.

“I think for so long, our fans were looking forward to free agency,” Carr said in an appearance on KGMZ-FM 95.7 The Game. “They were sitting there, champing at the bit, couldn’t wait for it, all the way up until really, probably this year ... at least 15, 16 years. ‘Man, who can we add this time? Who’s the next piece? Can we get this guy?’

“Now, Reggie, our front office and coach [Jack] Del Rio has done such a good job of adding talent, maybe through the draft or through free agency leading up to this, that we have a solid team. Now we just need a couple pieces ... to come in and help. Now we’re in a spot where our front office can take care of their own and do those kinds of things. And that is a really good thing to have, so I think our fans, as exciting as free agency is, if you don’t have to be heavily involved, I think it’s a really good problem to have for an organization.”

Oakland has been linked to big names like Martellus Bennett (who signed with the Packers), Adrian Peterson and Dont'a Hightower, but the Raiders haven't had any to town for a visit. They have also yet to re-sign running back Latavius Murray, though some momentum is building on that front.

The Raiders did sign offensive tackle Marshall Newhouse to a two-year deal earlier this weekend, but that has largely been the extent of any activity (be it signings or interest) to come out of Oakland.