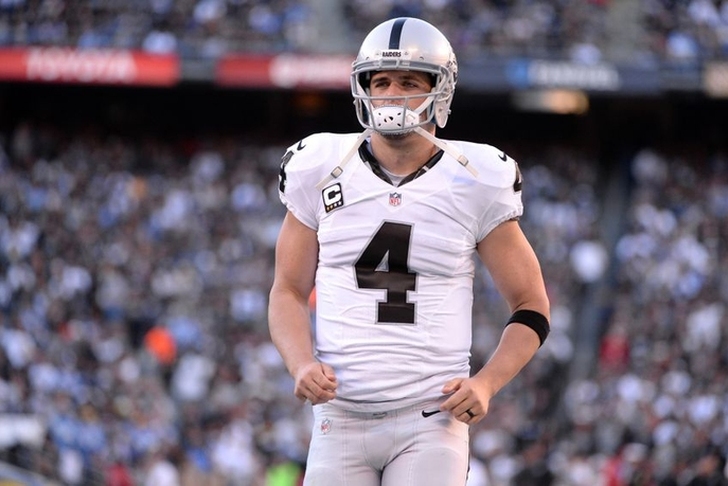 The Golden State Warriors won their second NBA title in three years on Monday, giving fans in the Bay Area reason to celebrate. Oakland Raiders quarterback Derek Carr is hoping he can do the same.

After the Raiders made the playoffs for the first time since 2002 last season, Carr said that Golden State's victory made him more "hungry" to win another championship for Oakland.

“Just to watch that, it makes you hungry every time you see another team or somebody celebrate a championship,” Carr said on Tuesday. “Just makes you dream those dreams you had as a kid standing on the stage, holding the trophies.

All the Warrior fans, most of them are Raider fans, if they don’t travel across the bay, root for that other team. Whenever you’ve got something going on, always in the Bay Area, there’s really no better place to win. It’s really cool.”

Carr also said that he sees some similarities between the Raiders and the Warriors.

“Our situation wasn’t very pretty, and all we cared about is busting our tail, outworking everybody and competing our tails off when we get in the games and doing it with class and honor. We always respect our opponents, but we fear nobody.

“When you watch a team like Golden State play, they obviously respect the team they’re playing. Obviously, (Cleveland has) LeBron (James), Kyrie (Irving). There is no doubt in my mind none of (the Warriors were) scared of them and that’s the kind of thing that you build. It doesn’t happen overnight. When we step on the field, we should expect to dominate.”

Oakland was the No. 2 seed in the AFC last year before Carr suffered a broken fibula in Week 16, and Oakland lost to the Texans in the wild card round of the playoffs.