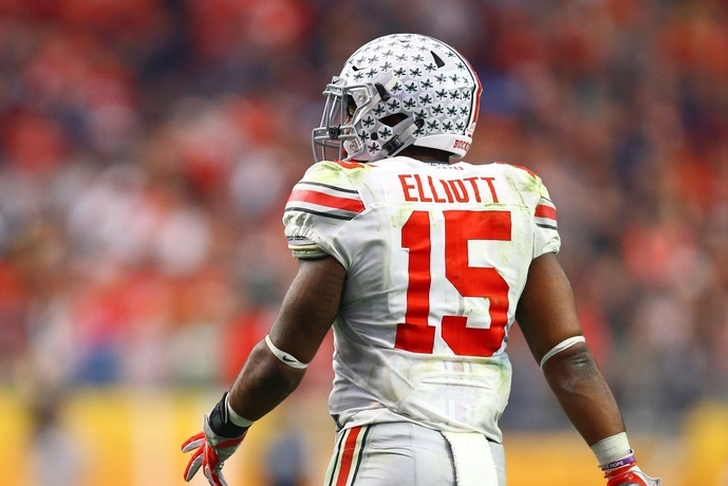 NFL Free Agency is over a week old, and while the Oakland Raiders have been among the most active teams early, they might not be done yet. With that in mind, here are all of the interesting rumors and news tidbits around the Raiders.

Oakland showing interest in Ezekiel Elliott?
The Raiders have been relatively quiet about their draft plans. Offensive line was expected to be an area they addressed, but that need has largely been filled in free agency. So, where could they turn? Just Blog Baby's Austin Gayle makes the case for Ohio State RB Ezekiel Elliott:

The Oakland Raiders lack clear depth at the running back position, and with the question marks surrounding Latavius Murray’s ability to be a bell-cow in Bill Musgrave’s system and Oakland’s 28th ranked rushing offense in 2015, targeting a physical specimen like Ohio State’s Ezekiel Elliott almost makes too much sense.

With Oakland, Elliot could ease his transition to the NFL by sharing touches with Murray during his rookie campaign, and if he manages to meet expectations, he would have the opportunity to assert himself into a premier role with Murray’s contract expiring in 2016.

Elliott had 1,821 yards and 23 touchdowns for the Buckeyes last season.

Cowboys looking to sign Benson Mayowa away from Raiders
Oakland is loaded at the pass rusher position with Khalil Mack, Aldon Smith, and the signing of Bruce Irvin, but they might be losing some depth. The Dallas Cowboys have shown interest in signing defensive end Benson Mayowa, leaving the Raiders with a tough decision, according to Golden Gate Sports' Kevin Saito:

From Dallas’s standpoint, it makes sense. DeMarcus Lawrence continues to rehab from back surgery and Randy Gregory will miss the first four games of next season afer being suspended for violating the league’s substance abuse policy. They’ve shown little interest in re-signing Greg Hardy – not surprisingly – and have two other free agents in Jeremy Mincey and Jack Crawford they’ve not re-signed yet.

Mayowa had 16 tackles with one forced fumble and one sack last season.