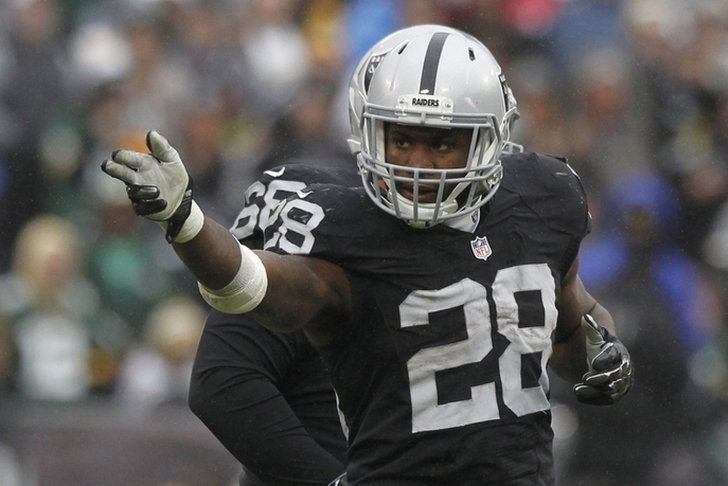 The offseason has reached a crucial point for the Oakland Raiders. The new league year starts on Thursday, March 9, and the two-day free agency negotiating window leading  up to the start of free agency (Thursday at 4:00 pm ET) as just started. During this time, teams may negotiate all aspects of a contract with a free agent but can't finalize the deal until the new year begins. Here are the latest Raiders news & rumors you need to know:

With so many rumblings about Murray getting more money in free agency than the Raiders are willing to pay him, and the likes of Adrian Peterson and Eddie Lacy being potential fits in Oakland, Raiders players have already voiced who they want -- Murray. So said Carr, who reiterated his desire on SiriusXM NFL radio last week. As did Irvin, who tweeted, “Say what y’all want but I want my dawg @LataviusM back!” In retaining Murray, who had 12 rushing touchdowns last season, the Raiders would get a known quantity in their system. In Peterson, who would likely have to agree to an incentive-laden deal, they’d get an older back who has dealt with injuries in two of the past three seasons. And in the draft, well, they’d get a total unknown. Still, Oakland needs a bigger lead back to go with Mighty Mites Jalen Richard and DeAndre Washington.

Murray ran for 788 yards and a career-high 12 touchdowns on 195 carries this past season.

Calais Campbell to Oakland?
The Arizona Cardinals are not expected to re-sign defensive lineman Calais Campbell, and with a need to upgrade the middle of their defense, the Raiders are interested in adding him. Bleacher Report's Paul Kasabian writes that Oakland should be the favorite to sign him:

Campbell is 30 years old and probably looking for a chance at a Super Bowl at this point in his career, so a place that makes sense is one that could pay him a lot of money and compete for a Lombardi Trophy.

Oakland, which needs to fill some holes on defense, would kill two birds with one stone. Campbell can come into Oakland and compete for a Super Bowl right away. Plus, Oakland has the ninth-most cap space in the league, per overthecap.com.

The Patriots are certainly taking a long look at the tight end position, but don’t count out the return of Martellus Bennett. We’re told that the interest between the Patriots and Bennett is real — the team actually approached him about an extension during the season — and that a return isn’t out of the question, if the price is right. The Raiders and Jaguars also have expressed serious interest in Bennett.

Oakland does have a need at the tight end position. Clive Walford and Lee Smith are the only two players at the position currently on Oakland's roster with Mychal Rivera set to become an unrestricted free agent.

In his first season with New England, Bennett caught 55 passes for 701 yards and seven touchdowns. He is expected to command a three-year deal worth roughly $18 million on the open market, according to Spotrac.

Follow our Oakland Raiders news page for all the latest Raiders rumors!