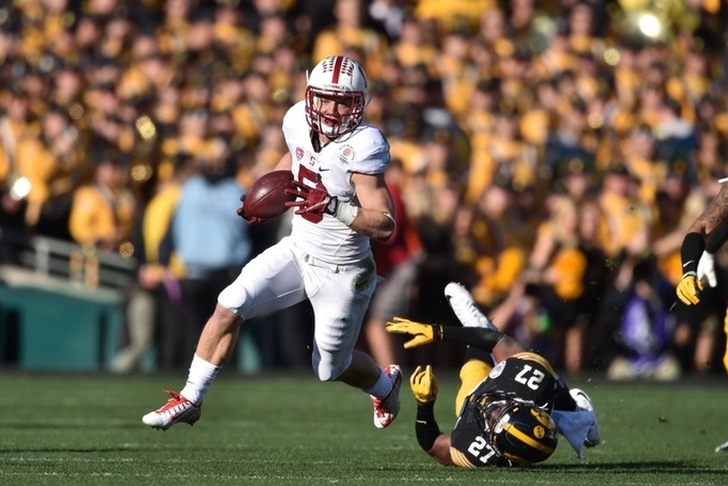 Oakland targeting Christian McCaffrey in first round?
The Raiders need a starting-caliber running back after letting Latavius Murray walk in free agency, and while they plan to pursue Marshawn Lynch if he comes out of retirement, Will Brinson of CBS Sports projects that Oakland will draft Stanford's Christian McCaffrey.

Let’s assume the Raiders bring Marshawn Lynch out of retirement to be their “feature” back. They still need some more talent at the position and McCaffrey would be a perfect complement to Lynch. He would also be a popular pick with the fan base, which shouldn’t be overlooked at this point.

Raiders hold workout for Bucknell OT Julie'n Davenport
In an effort to find depth along the offensive line, Oakland is bringing in Bucknell tackle Julie'n Davenport for a pre-draft workout, according to Aaron Wilson of the Houston Chronicle.

Julie'n Davenport has worked out for Buccaneers, Panthers, Chargers, Bengals, to work out for Texans, Jaguars, Falcons, Raiders, Cowboys

Davenport checked in at 6-foot-7 and 318 pounds at the NFL Combine, making him one of the biggest offensive linemen in this draft. He is expected to be a fourth- or fifth-round pick.

Raiders won't have extension talks with Derek Carr until after the draft
Now, to a player currently on the Raiders' roster. It's no secret the Oakland would like to sign quarterback Derek Carr to a long-term extension, and they plan to have serious negotiations after the draft, according to NFL.com's Conor Orr.

After the draft, the hard work begins for the Super Bowl contending Raiders: Find a way to sign quarterback Derek Carr to a long-term extension while still leaving some money in the pot for Khalil Mack and Gabe Jackson.

"He knows what we're trying to do in free agency, and he's never saying, 'I need to know now.' It's not like that," Raiders general manager Reggie McKenzie told CSN Bay Area this week in Phoenix at the Annual League Meeting. "More likely, the serious talks will happen after the draft. The communication has been ongoing, just talking about the philosophy of a contract and the thought process around it. Hopefully when the serious talks start going, then it's going to be easier."

The quarterback, guard and edge rusher markets have not been cheap over the past two seasons (guard has especially skyrocketed thanks to Kevin Zeitler's deal this offseason) and all three of Oakland's home grown stars will challenge McKenzie in the coming months and years.

Carr, however, will come first.