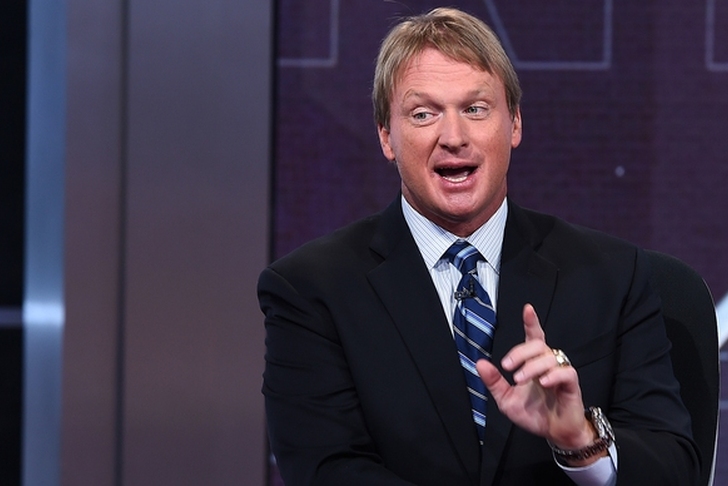 Following a 30-10 loss to the Chargers on Sunday, the Oakland Raiders finished the 2017 season with 6-10 record, a major disappointment after going 12-4 in 2016. With rumors swirling for weeks that he had lost the locker room, the team fired coach Jack Del Rio on Sunday.

As such, it figures to be a busy off-season in the Bay Area as the team prepares to move to Las Vegas for the 2020 season.

Adam Schefter Says Gruden Expected To Be Raiders Coach
Oakland's attention is on the former head coach and current ESPN analyst Jon Gruden, and he's expected to take the job, according to ESPN's Adam Schefter.

Jon Gruden Getting Offer He Can't Refuse
According to New York Post's Hannah Withiam, the Raiders seem primed to make Gruden an offer he can't refuse. The Raiders job has appeal for Gruden beyond simply returning to coach.  He has a chance to work under Mark Davis, Al Davis' son and get partial ownership of the team. A source told ESPN that Davis has "an affinity for him."

Gruden's Awkward Week
On the surface, it's been business as usual at ESPN even as rumors of Gruden leaving his analyst role with the network dominated the news cycle over the past 36 hours.

“I don’t want to sit here and speculate. There is no news to report,” Gruden told ESPN this weekend. “I can’t say I haven’t taken any phone calls. I take a lot every year from coaches, some others. Yeah, sometimes owners. Guys want to bounce ideas off me. I’m here to help people.”

Gruden’s own employer (ESPN) is behind the report, which makes this story seem legitimate. The Raiders already fired Del Rio and Tuesday morning on WFAN, Boomer Esiason said that it’s considered a “done deal.”

“He has no business being the color analyst for ESPN doing the game. No way. You can’t have both,” Esiason said. "I love Jon, I am happy that he’s back in the league. I want them to do well, but an active coach in the NFL under these circumstances should not be in the production meetings.”

Many people including Esiason believe having Gruden in the Titans and Chiefs productions meetings isn't fair since he could gain a competitive advantage against future AFC teams.

John Gruden Talk Is Real
When Del Rio was fired, everyone was surprised, even quarterback Derek Carr.

On Monday, Schefter went on SportsCenter and added smoke to the fire by saying this, "For Jack Del Rio to walk into his press conference minutes after his game ended yesterday to say that the Raiders' owner Mark Davis had informed him that he's no longer coaching the team tells you that the Jon Gruden talk is real, and that it's going to happen,"

3 Reasons Gruden To Raiders IS Happening
Albert Breer from the MMQB reported on Twitter that Gruden's decision to come back to coaching after nine years away from the sideline is a near-lock to be announced, based on the following 3 things:

1) He's been lining up a coaching staff for a few weeks.
2) He's not as happy as an announcer as he used to be
3) His youngest child graduates high school next year

Though Gruden-to-Raiders appears to be a done deal, we will break down the top 5 candidates for the Raiders coaching job live on NFL Daily today on Facebook Live at 6pm ET. Also, for more on this story follow our Oakland Raiders team page for all the latest Raiders news.