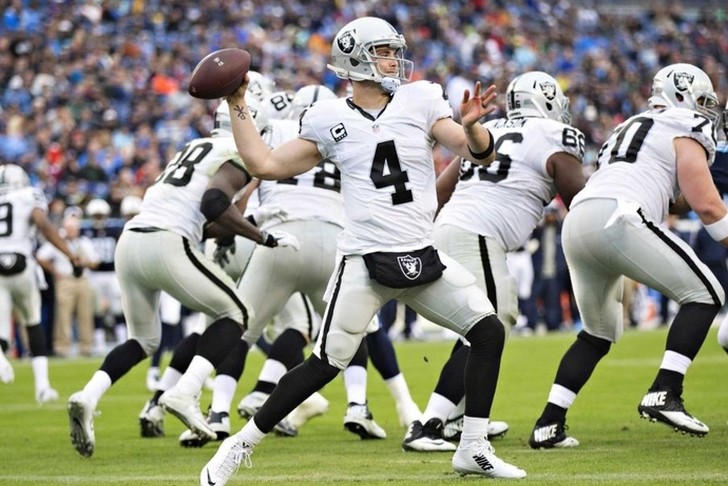 The Oakland Raiders engineered a comeback 24-21 win over the Tennessee Titans on Sunday, overcoming sloppy conditions in Nashville and a couple seemingly lost opportunities to move to 5-6. Tennessee falls to 2-9, leaving them alone at the bottom of the AFC standings for now. Here's some notes, quotes and observations from Oakland's big road win.

Titans CB JW Webb's controversial fourth-down defensive holding flag will be debated in Nashville all week long, but the fact remains that it wrested defeat out of the jaws of victory. Raiders QB Derek Carr took full advantage, hitting Mychal Rivera and Seth Roberts in sequence to give Oakland the lead to stay with 1:21 left.

Neither running game did much of anything on Sunday, with the Raiders holding a 84-44 advantage in overall ground yardage. However, Oakland was able to paper over their rushing woes with Derek Carr's 323 passing yards and three touchdowns.

The Titans have lost 11 in a row at home.

"We get another chance, and we go win it. Finally, we won today and it just feels good." -- Raiders QB Derek Carr after a defensive holding call prolonged the team's game-winning drive

"The one call is the call, it changes the game, changes the outcome of the game." -- Titans HC Mike Mularkey on the critical holding call

"I'm really proud of the way they guys stayed in it. It was tough. There was a reason to be discouraged. You're in control of the game, you fumble it and all of a sudden they go down and get a score. And it's `Oh my gosh, what are we going to do?' Well, we're going to go down there and find a way to get it in there and get a score." -- Raiders HC Jack Del Rio

The AFC playoff race is a mess, but what we do know is that the Raiders are right in the thick of the Wild Card chase at 5-6. There are currently four teams ahead of them for two spots, but Oakland does have a head-to-head tiebreaker over the 6-5 Jets. They'll have one over the 6-5 Chiefs too if they can win next week's home game and move to .500. The Steelers and AFC South runner-up (Texans or Colts) still loom, with Pittsburgh's win over Oakland looming large. But, if you would have told Raider fans that this team would be in this position with five games to go, the vast majority would have taken it.

Tennessee is doing Marcus Mariota no favors. Mariota is not going to grow as an NFL quarterback when he's throwing on over 70% of the team's offensive plays. The Titans running game is a legit mess, so it's hard to blame interim coach Mike Mularkey from riding the rookie in such a way. But, priority #1 for the offense this offseason is to find a competent running back or two that can spell Mariota and give him time to work off a play action.