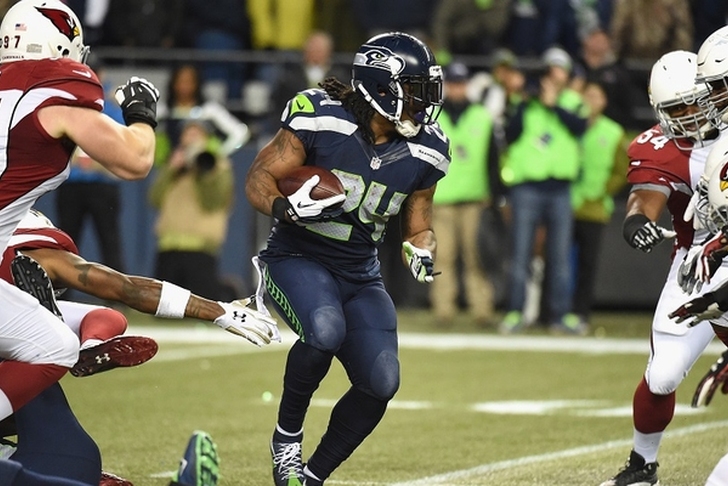 NFL free agency is well under way and the Oakland Raiders have found themselves at the center of several rumors. The Raiders weren't as active as they were last year in free agency, but they have made a few moves. And with the Marshawn Lynch rumors and the NFL Draft coming up, Oakland isn't done yet. Here are the latest Raiders news and rumors you need to know.

Marshawn Lynch And The Raiders
The Lynch-Raiders rumors aren't going away anytime soon. In face, the buzz around Marshawn Lynch returning to the NFL has never been louder. Here's what a source told Sports Illustrated's Peter King.

"He [Lynch] really wants to play for the Raiders," the source told King. "He also wants to do good things for his foundation in the area. This is a great chance to accomplish both things."

King's report is backed by one from Ian Rapoport.

2 tidbits on Marshawn Lynch: 1. Source on un-retiring says it’s “realer than it’s ever been” … 2. It’s #Raiders or bust. #BeastMode

Now there are some complications to a Lynch deal. For starters, the Raiders (and Seahawks) aren't interested in paying him his $9 million salary next year. Seattle likely wants to get something for Lynch, as opposed to outright releasing him if/when he unretires, but the Raiders don't want to give up much in a trade. A release clears up both issues for the Raiders in terms of contract and draft pick compensation. But by all accounts, the Lynch-Raiders rumors are real. Now, it's just a waiting game.

Raiders To Add E.J. Manuel
It looks like the Raiders will add a new QB to roster.

The expected EJ Manuel signing with the Raiders is apparently happening soon, per source.

Manuel is a former first round picked who busted with the Buffalo Bills. In his career, he's completed 58.3 percent of his passes with 19 TDs and 15 INTs. His playing time has decreased each year he's played. He should battle with former 4th round pick Connor Cook for backup QB duties.

Jelani Jenkins To Visit
The Raiders are in need of linebacker help, with Perry Riley unsigned and Malcolm Smith in San Francisco. They're now bringing in a former Miami Dolphin for a visit.

Jenkins has battled injury issues during his NFL career since the Dolphins made him a fourth round pick out of Florida. He was limited to just nine games and 29 tackles last year. Given the injury issues, Jenkins alone won't solve the Raiders' linebacking issues.

Follow our Oakland Raiders team page for all the latest Raiders Rumors and news or download the Chat Sports App!