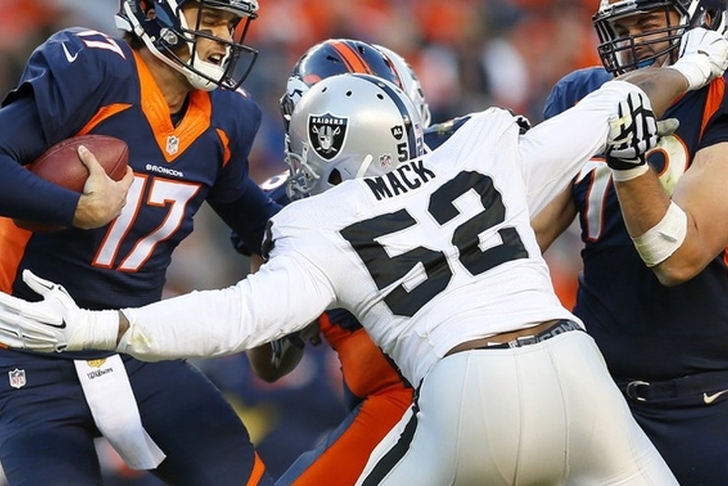 Take a bow, Khalil Mack. The second-year Oakland Raiders (6-7) defensive standout had five sacks of Denver Broncos (10-3) quarterback Brock Osweiler, one for a safety, in Oakland's 15-12 win over the Broncos in Denver. Here's some notes, quotes and observations for the Raiders' defensive gem.

Khalil Mack's five sacks were the cure-all in a sloppy day for the Raiders. Derek Carr struggled mightily except for two TD passes, one a go-ahead strike to Mychal Rivera. Oakland lost long snapper Jon Condo to an injury -- a major factor in a missed FG by Sebastian Janikowski. Jack Del Rio inexplicably went for two after the Raiders went up 15-12 in the fourth. Mack was Superman on this day.

The biggest miscue of Denver's day goes to tight end Vernon Davis. He was wide open and took an Osweiler pass right to the chest on a fourth-and-five at the Oakland 42 with 3:45 left, but was unable to bring in the football. That was Denver's last real chance.

Oakland's defense held Denver to four field goals in the first half, keeping the halftime deficit at 12-0 when it could have been much more. That was HUGE, considering that the Raiders posted negative-12 yards in the first 30 minutes -- the worst mark in the NFL in nearly a quarter-century.

Denver failed to get into the end zone on Sunday, missing opportunity after opportunity in Osweiler's first loss as an NFL starter.

"God is good!!" -- Khalil Mack on Twitter following the game.

"We has many, many chances and failed to get it done." -- Broncos HC Gary Kubiak

"Can't help but remember how many crazy eyes I received when I said the Raiders would beat Broncos this weekend." -- David Carr, Derek's brother, after Oakland's win.

“We weren’t doing anything from a momentum standpoint. We were playing great defense and getting the ball back, I just felt like we needed to do something to go out there and make a play." -- Gary Kubiak on 4th-and-5 which led to Davis' dropped pass.

Oakland had lost three of four headed into this one, falling to the fringes of playoff contention. While moving to 6-7 may not mean much postseason-wise (there's three teams ahead of them at 8-5), taking down the AFC West leaders on the road is indicative of just how far this team has come in their first season under Jack Del Rio. They've doubled last year's win output, and may be just one offseason away from being a legit division favorite -- especially with Peyton Manning likely on the road to retirement.

This could be an extremely costly loss for Denver. All three of the Broncos' defeats have come against the AFC. Unless the Patriots fall back into a tie or below Denver (Broncos beat Patriots head-to-head), Denver would lose a tiebreaker with the Cincinnati Bengals for the #2 seed. Both teams are 10-3. That tiebreaker could be the difference between a first-round bye and a Wild Card game.